Earlier this month, for the first time in its history, San Francisco Animal Care and Control, the city shelter, announced that it was so overwhelmed with surrendered dogs it wouldn't be taking any more until it had more space. (To its credit, it also responded by dropping adoption fees rather than simply upping the euthanasia rate.)

The economy is taking a dire toll on families, and unprecedented numbers of dogs are ending up in shelters and rescues as a result. All too often, abandonment is the result of the dog developing a medical issue and the financially strapped owner being told that the only option for treatment, when one exists at all, is surrendering the dog.  When the dog has otherwise been well cared for and the family is otherwise happy together, this is a huge lose-lose-lose. It's a lose for the humans who have their hearts broken, it's a lose for the shelter or rescue that has scarce resources taken up for a dog who might otherwise be able to stay home. And it's especially a lose for the dog in the all too common situation where shelter personnel decide he's prohibitively expensive to treat and euthanize him instead.

Recognizing this situation, two local organizations recently have been formed to help keep dogs with their families by providing veterinary services to those who need them, regardless of finances. In San Francisco, the San Francisco Veterinary Medical Association just launched San Francisco Aid for Animals, which is holding its first gala fundraiser Saturday Sept. 17 at the a.Muse gallery in San Francisco. Enjoy chocolate, wine and cheese, and know you're making a life-and-death difference to a dog in need.

Meanwhile, in the East Bay, the PAW Fund will be holding a free vaccination clinic at Trinity Methodist Church in Berkeley, also on Saturday. In its few months of existence, this dedicated group of volunteers and its partners has hosted vaccination clinics and provided everything from flea treatment to major surgery to dogs who otherwise faced a grim future. They can use help in all forms, from volunteers to donated vehicles, so please pitch in if you can! 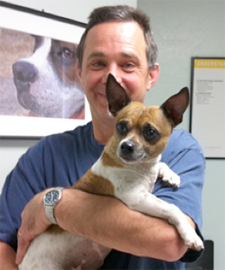 Thanks to  San Francisco Aid for Animals, Riot, shown here with his dad Peter, received lifesaving surgery and is now back with his family.