The loss of beloved miniature schnauzer Maddie in 1997 left a large void in the lives of Dave and Cheryl Duffield. They've kept her memory alive by starting a charitable foundation, Maddie's Fund®. They endowed it with $300 million, and have spent nearly $100 million to save the lives of shelter animals across the United States. 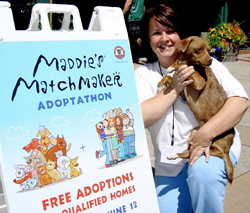 Last year, Maddie's Fund sponsored the first Maddie's Matchmaker Adoptathon, in which people from all over the East Bay lined up to adopt dogs and cats, and adoption fees were waived because Maddie's Fund made a donation for each adopted animal. Nearly 2,000 animals found loving homes during the two-day event, and participating shelters received $1 million from Maddie's Fund.

It all happens again this weekend: the second annual Maddie's Matchmaker Adoptathon is on June 4-5, 2011 at locations all over the East Bay. Again, adoptions are free to qualified homes and shelters will receive $500 – $1500 for every animal adopted. Maddie's Fund has pledged $2 million this year to ensure that all healthy and treatable animals in Alameda and Contra Costa County will be adopted.

Many wineries welcome dogs on their premises, but for some, the canine connection runs especially deep. Rescue organizations… Read more.

As a faithful reader of DogTrekker, the newsletter, you know that we are passionate about supporting shelters and… Read more.

The Humane Society for Inland Mendocino County got its start when a benefactor decided the county needed an… Read more.