When we last checked in with the Milo Foundation, they were noticing a sharp increase in the number of Chihuahuas landing in Northern California shelters and now having the sad distinction of being the most euthanized animal in our shelters. It's a California phenomenon, and Milo is trying to help change. In recognition of the fact that more small dogs than large dogs are now facing euthanasia in the shelters, Milo has dropped its adoption fees on Chihuahuas and has incentives for adopting pairs. Milo always has adult and puppy Chihuahua types, and they really vary! 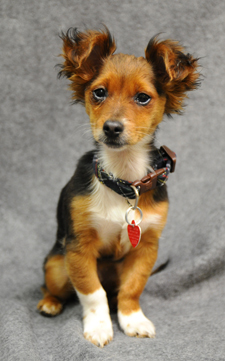 This time of year, the shelters are also swamped with puppies (you hear about Kitten Season, but not so much about the puppy equivalent). Milo has been rushing to take in as many as possible of the little cuties–Chihuahuas and otherwise–and will have a very large selection of them—Lab-mix, herding breed mixes (both border collie and cattledog crosses), and all sorts of scruffy and other pups, as well as adorable Chihuahuas, at least 20 pups and some dogs and kitties—at Woodlands Pet Food and Treats in Mill Valley on Saturday, February 25, available for viewing, ooh-ing, aah-ing, and adoption from noon to 4 p.m. Many fine animals are always available at Milo Marin, 2060 Fourth St. in San Rafael, too.

Caring for hundreds of dogs at its Mendocino sanctuary, Milo conducts adoptions at Milo Marin, as well as at frequent mobile adoptions in Marin and the East Bay.  One of the Bay Area's oldest and most successful rescues, they have saved over 20,000 lives in their 18 years; they welcome and need your donations, as well as all kinds of volunteer help, including fostering.

As a faithful reader of DogTrekker, the newsletter, you know that we are passionate about supporting shelters and… Read more.

Founded in 1947 by San Francisco residents concerned about the city's stray animals, Pets Unlimited got its start… Read more.

NorCal Boxer Rescue's dedicated network of volunteers takes in boxers who land in shelters throughout California, as well… Read more.

Saluting the Dogs of War

Afghanistan is no place for dogs. Shunned as unclean in the regional interpretation of Islam, they live a… Read more.

BONES (Better Options for NEglected Strays) in Covelo was started by a dedicated group of volunteers in rural… Read more.