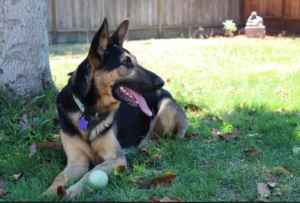 Things looked grim for young Chance. An energetic young German shepherd, he'd managed to get hit by a car, shattering his left front leg in the process.

Fortunately for him, Rocket Dog Rescue swooped in and got him the medical attention he needed, and after months of recovery in his foster home, you'd never know he was ever in such dire straits. He's an athletic guy who needs a lot of physical activity and mental challenges to keep him busy. He also loves to accompany his person on social outings, and is something of a rock star meeting and greeting his many fans on the trail and at the restaurant. Chance seeks a human who will appreciate his companionship and continue his training—he's done very well with the basics and will definitely work for treats.

It's been a busy year for Rocket Dog, which celebrates its 15th year of lifesaving this year (8,000 dogs so far). San Francisco issued an official proclamation designating November 6 as Rocket Dog Rescue Day in honor of the organization's work—which can be seen up close and personal at weekly adoption events around the Bay. Rocket Dog's East Bay urban sanctuary in Oakland, meanwhile, has become a haven for dogs and a resource for the community since it opened in 2014. None of this would be possible without a lot of community support and a platoon of dedicated volunteers, who take on tasks from fostering to fundraising. If you'd like to help out, find out more here.

Whether you get your dog from a rescue, a shelter, or a breeder, you want that person's primary… Read more.

Ruby and Jack Arrive from India

Intrepid DogTrekker Dave Bratton had some unexpected fun this morning hanging out with these cuties, two dogs that just arrived… Read more.