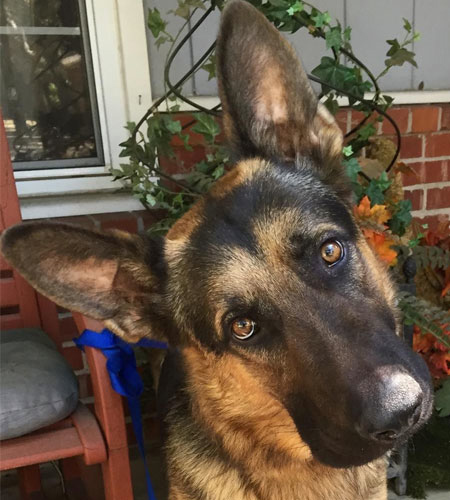 Pulled in the nick of time from a high-kill shelter in Fresno, young Falco had barely arrived in his foster home when his rescuers realized that something was seriously wrong. The young German shepherd was much too thin, but when he tried to eat he screamed in pain.

Luckily for Falco, he'd been taken in by Second Chance German Shepherd Rescue, who feared the worst but were determined to relieve his pain and give him a quality life if they could. As his vet soon discovered, he was suffering from a dislocated temporomandibular joint (joint of the jaw), which caused excruciating torment when he tried to eat—but was relatively easy to fix. After some chiropractic work, the pain was gone, his appetite returned, and so did his zest for life. Now in foster care, he's happy, healthy, and having fun while waiting for his perfect match.

Perfect matches are what it's all about for all-volunteer Second Chance, founded in December 2014 by over 60 longtime veterans of German shepherd rescue, including vets, trainers, and other lovers of the breed. Pulling GSDs from life-threatening situations, they provide vet care, nurturing foster homes, and the opportunity to learn the social graces dogs need for a happy life with humans.

For co-founder Dez Murray, it's very personal: "German shepherds saved my life years ago during a home invasion robbery, and now rescuing them is my way of giving something back to the world."  In its first 10 months, Second Chance has saved the lives of 125 dogs and placed them in great homes. "Matching the right people with the right dogs is key," says Murray, pointing out that large, smart, high-energy dogs with a strong work ethic aren't for everybody. "We don't want dogs to go to homes where they're going to fail.” So far, this due diligence seems to be working out well: two dogs weren’t a fit for their adopters and came back to Second Chance, while the rest have settled in nicely in their new homes.

If you think a German shepherd is right for you, the folks at Second Chance would love to talk. Come meet them—and Falco and his pals—at one of Second Chance’s three adoption events every month, in Roseville, Walnut Creek, and San Jose.

NorCal Boxer Rescue's dedicated network of volunteers takes in boxers who land in shelters throughout California, as well… Read more.

With nearly 55 years of animal rescue under its collar, Woods Humane Society is one of San Luis Obispo County’s… Read more.

Leave No Paws Behind

Leave No Paws Behind rescues senior and special needs dogs in imminent danger in shelters, gets them to… Read more.

Woody. Photo: Pets Without Partners Every Saturday morning at PetSmart in Redding, a dedicated band of volunteers converge… Read more.

Since 1947, the Humane Society of Tuolumne County, located in Jamestown, has been dedicated to providing a safe… Read more.