Calistoga On a Leash 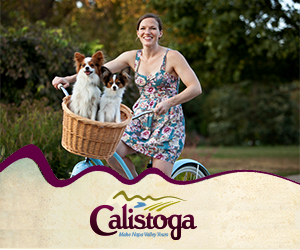 A welcoming destination with a rich history, the charming town of Calistoga caps the far north end of the Napa alley like a cork in a bottle. Recently named one of the ten best small towns in America by Fodors Travel, Calistoga encourages visitors to stay a little longer, with small-town ambience, dog-friendly dining and lodging options, the walkability factor and the many wineries that roll out the red carpet for you and your best friend. The recent quake was centered well to the south, and Calistoga’s wineries and attractions are open for business.

One of the most visually interesting wineries in the area takes its architectural cues from European castles. Castello di Amorosa, although fairly new (it took 13 years to build and opened in 2007) is the fantastical creation of fourth-generation winemaker Dario Sattui, owner of dog-friendly V. Sattui Winery in nearby St. Helena.

Sattui’s lifelong obsession with Italian medieval castles led him to build a replica that has become one of Napa Valley’s most popular tourist attractions. The castle’s gawk-worthy grounds and exterior (replete with moat and wandering peacocks) are in themselves worthy of a look-see. Dogs also are welcome to accompany their people on a self-guided tour ($16) of interior courtyards and spaces.

A perennial DogTrekker favorite is family-owned Dutch Henry Winery on the scenic Silverado Trail, where visitors are likely to be greeted by one of the establishment's resident Airedales, who are the inspiration behind Dutch Henry's Terrier Station Cabernet (OK, give the Grateful Dead some credit, too). Purchase a bottle or enjoy a tasting, then repair to the picnic grounds and bocce courts, where Rover can relax while you sip and bowl.

Save room for a leisurely meal at a dog-friendly restaurant when visiting Calistoga. Michelin-starred SolBar, the restaurant at the five-star (and dog-friendly) Solage Calistoga Resort & Spa, welcomes four-legged companions at outdoor tables in a gorgeous poolside dining area. Easier on the pocketbook is the Calistoga Inn Restaurant & Brewery, home to an attractive and very popular outdoor dining venue alongside the Napa River in the heart of downtown.

A bit of backstory: Calistoga takes its names from a famous slip of the tongue made by Gold Rush-era entrepreneur Sam Brannan, who vowed to turn the hot-springs-laced region, long frequented by the Wappo Indians, into a spa resort similar to Saratoga Springs in New York. His boast of creating the “Saratoga of California” came out instead as the “Calistoga of Sarifornia.” The name stuck, and Brannan went on to develop not only a resort town, but a railroad providing easy access for visitors arriving from San Francisco.

Hot springs and spa treatments are still a big part of Calistoga’s tourism economy—but alas, we have yet to find a mineral pool that allows four-legged guests to soak at their people’s side.

Gold Rush entrepreneur Sam Brannan founded Calistoga with the intent of harnessing its hot springs and making it… Read more.