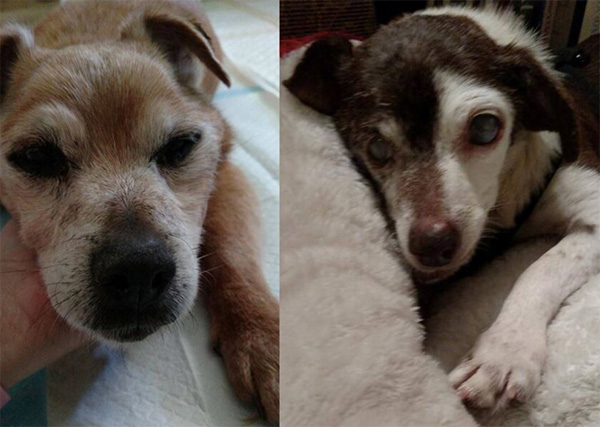 Franco and Billy. Photo courtesy of Leave No Paws Behind

Without a doubt, it was a heartrending photo: a Southern California shelter volunteer, her arms wrapped protectively around Tony, a scared-looking, elderly Jack Russell terrier. Her Facebook post explained that she'd done everything in her power to find him a home, but he had mere hours left and she was begging for help.

The post got forwarded to Leave No Paws Behind, and, as thousands of followers watched in suspense, little Tony was swooped to safety. As with many LNPB rescues, his prognosis was guarded due to a scary-looking tumor, but however many days he had left, they were going to be good ones.

Since Toby Wisneski founded LNPB four years ago, variations on this story have played out many times. Like Franco and Billy, senior gentlemen left in poor health at shelters and slated for euthanasia, now receiving much-needed medical treatment and loving attention in a foster home.

Ms. Toby, as she's known to all, tells us: "Our doctors are amazing at East Valley Veterinary Clinic, led by DVM Mark Hohne, and have cared for countless LNPB dogs." Sometimes it's a matter of comfort and palliative care in a senior's final days, but many a dog who has arrived in dire straits has improved dramatically. Wisneski notes that one of the group's earliest rescues, taken in and expected to be a short-term hospice situation, is doing quite well three years later. She just turned 19.

All this is possible because of supporters worldwide, in particular fosters who step up and offer a safe haven to vulnerable senior shelter dogs. That's what saved 16- and 17-year-old Franco and Billy, as a kind soul responded to LNPB's plea and took them in together.

Currently 45 dogs are in long-term foster and/or hospice care with LNPB, who cover all medical bills. "Rescues rescue," says Wisneski, "but fosters save lives." If you can help, she'd love to hear from you.

Oh, and Tony? After a successful removal of that gnarly tumor, he is in excellent health and living large in his new, loving forever home.

Photo: Franco and Billy. Photo courtesy of Leave No Paws Behind