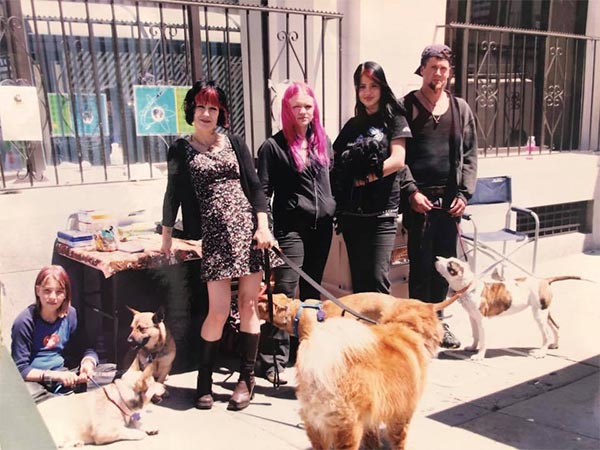 San Francisco's Rocket Dog Rescue is celebrating its 17th birthday, mostly doing what it does best—saving dogs who really, really need it. Since they opened their Urban Sanctuary and Adoption Center in East Oakland, they've become a trusted resource in the surrounding community.

Which is why, in the wee hours of the morning a few weeks ago, a homeless person in the neighborhood called Rocket Dog with a horrific discovery: two German shepherd puppies in a garbage heap, clinging to each other and, it soon proved, terribly mutilated. One's hind foot had been chopped off, but her sister was in far worse shape with a life-threatening injury, her jaw deliberately crushed. Dubbed Freya and Frigg, they were rushed off for emergency care, where an orthopedic surgeon successfully rebuilt Freya's jaw. Shockingly, while all this was happening, a husky puppy, soon called Chloe, was found with injuries similar to Frigg's, and also given reconstructive surgery.

Oakland Animal Services is investigating leads in the crime, and the puppies are recovering, with foster and adoptive homes already waiting. Meanwhile, the phone keeps ringing, and founder Pali Boucher and the many volunteers of Rocket Dog keep getting out of bed and driving to dicey parts of town at all hours to take in some dirty, stinky dog who desperately needs them (like current social-media darling baby Rumple). And then nurture, care for, and generally transform that dog while reaching out to find his perfect family, on the Internet and at regular adoption events around the Bay. Over the last 17 years, Rocket Dog has been the difference between life and death for 10,000 critters, and in the process become a beloved Bay Area institution.

Since we last checked in with the good folks at Mendocino Coast Humane Society, who have been pitching… Read more.

Varsha With the holidays coming up, all of us at DogTrekker salute the life-saving work of dog rescues,… Read more.

Nick Here's Nick, doing what he does best, soaking up the human love (in this case, as his… Read more.

It's a sweet thing when people with special needs and homeless dogs come together and help each other… Read more.

Founded at the height of San Francisco's AIDS epidemic when food-bank volunteers banded together to provide support for… Read more.

Troy. Photo courtesy: Pets Lifeline Not so long ago, little Troy here was on the streets. He was… Read more.

Peter and Mary here got a bad start in life. Luckily for them, they landed at the Humane… Read more.